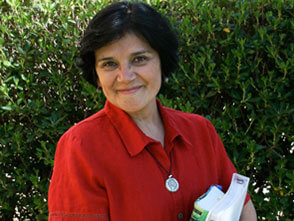 Sisters of Charity of the Incarnate Word (San Antonio)

It all started when I was eight. One afternoon my dad took me to visit an aunt who belonged to a religious congregation at her convent. I remember that I sat on a bench in a beautiful garden outside the chapel while my dad talked with my aunt. I could hear the sounds of the students in that place, and of the Sisters doing their daily chores. It’s hard to put into words, but I began to feel so comfortable, so at peace, and in such calm that I thought: “How nice it would be for me to live here!”
It was then I realized that there was a large statue of the Sacred Heart of Jesus inside the chapel that looked like He was watching me, as if He wanted to speak to me. Later, my dad told me that at that very moment, my aunt had asked him, “What do you think Leticia’s thinking about?” I remember that I felt a sudden urge to speak to Jesus’ image, and I told Him: “Jesus, I want to be your girlfriend forever; I promise you that I will never get married, so I can be your girlfriend forever.” Of course, I later forgot my promise, especially during my adolescence and early adulthood, but I believe that Jesus never forgot it, because He allowed me to remember my promise a long time later.

I am Leticia de Jesus Rodriguez, a vowed member of the congregation of the Sisters of Charity of the Incarnate Word, San Antonio. I was twenty-one when I was able to make good on the promise I had made to Jesus when I was a little girl; I was engaged to be married to a boy who had been my boyfriend for over five years, and we felt that it was time to get married. But something wasn’t right. There was something inside me that wouldn’t let me be, as if I was getting into a new situation that wasn’t for me, where I wasn’t going to be happy. So my fiance and I talked about it, and decided to go to a retreat for young people who were planning to get married. We both went, but then he didn’t want to go back and complete the course. I did. At the end of the week, they asked us where we saw ourselves in the future; of course, I said that I wanted to be committed to service, but definitely not to a marriage. This recognition gave me a new sense of freedom after having felt unsure of myself for quite some time. Obviously, my engagement was called off, and that made me even happier and gave me even more freedom.

As a result of the affirmation I received after the retreat, I searched for ways to channel my desire to serve, and joined a young people’s Bible study group to prepare for a ministry in the Church. I prepared to go on missions to poor places in my country, Mexico. I belonged to the young missionaries group for two years, and discovered that I was very happy serving others; and that it gave me a greater sense of freedom than I had never felt before. During my time as a young lay missionary, Jesus reminded me that I had promised Him that I would never marry and that I would be His girlfriend forever. So I renewed this vow, privately of course, and this gave me peace and emotional stability… at least for a while. In my heart however, I was not at peace. After a while, I realized that my need for God was never satisfied; instead, it grew stronger each day. It was then that I realized that I wanted to make a full-time commitment to Jesus; but at the same time, I felt tied to my work, my friends, my hobbies and adventures, and above all, to my family.

It was during this time of crisis that God sent me the vocational promoter of the Sisters of Charity of the Incarnate Word, who was a gift of God for me. One day, while I was in an interview and after having discussed and lamented my situation, the Sister asked: “Leticia, do you believe in me? Do you believe I’m telling you the truth?” I said yes, that I had faith that God had sent her to me. Then she said: “Leticia, you have the vocation for religious life. Jesus, the Incarnate Word, is calling you to serve Him. Do you believe this?” That was when I realized that those were the words my heart was longing to hear, and I answered, through my tears, “Yes, I believe.”

After that interview, I entered a preparation process that was not easy (rather, it was quite to the contrary). On September 5, 1985, I was finally able to begin the religious life in the Congregation of the Sisters of Charity of the Incarnate Word. I took my first vows on August 15,1988. I am now expecting to (and I trust that I will) celebrate my twenty-fifth anniversary of religious consecration in 2013. With the help of Jesus, the Incarnate Word, and your prayers, my readers, I will continue and finish my life in this world, as His “girlfriend forever”, until the end.