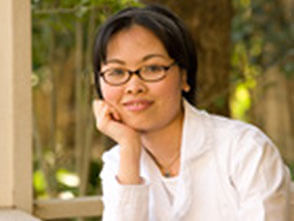 Sisters of the Incarnate Word and Blessed Sacrament

I was born in Viet Nam and came to the United States to do missionary work. Usually people think of a missionary as a person who goes to help in a Third World Country, not one who comes from a poor nation. We knew there were many Vietnamese who had settled in the United States, and they needed our help. There were many who had fallen on hard times or who had lost their way in the transition to their new life.

I was working in Corpus Christi at a day shelter for the homeless and living with the Sisters of the Incarnate Word and Blessed Sacrament. I soon began to feel a call from God to join them. In Viet Nam I was a nurse. Right now I am a student learning English and music. I also help the Vietnamese living in the area to rediscover their culture and language.

Working with the Homeless: I feel compassion toward the homeless and like to work with them. I remember one young man who had been a refugee from Viet Nam and had a good job in the United States. He began to gamble at the casinos and use drugs. He soon lost all he had gained including contact with his family. As he began to talk with me, I found out he very much wanted to go back to his family, but thought they would be angry. Eventually, he not only went back to his family, but also was welcomed home like the prodigal son.