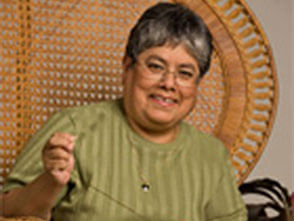 I came from a very poor family, and a lot of people helped us along the way. I saw the Dominicans “walking” with people and speaking out against injustices. I knew that is how I could give back what I had received. I wanted to break the cycle of poverty and abuse that many people were in.

The SAFE program: Working with the families, I fell in love with social work, and received a Master’s in Social Work with a concentration in Gerontology. I work at Catholic Charities with the SAFE program, which provides services for alone and frail elderly. I also worked as Director of the St. Vincent de Paul Village, a transitional housing facility for homeless families.

Working for the families: Although most of the families at the Village were local people, we had an influx of refugees from Haiti, Kosovo and Africa as well. But, in whatever circumstance, all these families needed help in breaking the cycle poverty. We deal with a lot of the children and try to show their families not only what services they can receive, but also that there is another way of living. I remember one family with five children that I worked with. Eventually the parents received their citizenship and the children, who were already citizens, became top achievers in school. The oldest daughter went on to serve four years in the U.S. Navy. It’s wonderful to see how families can succeed with just a little help at the right time.